Lille Skole Was Part of the World 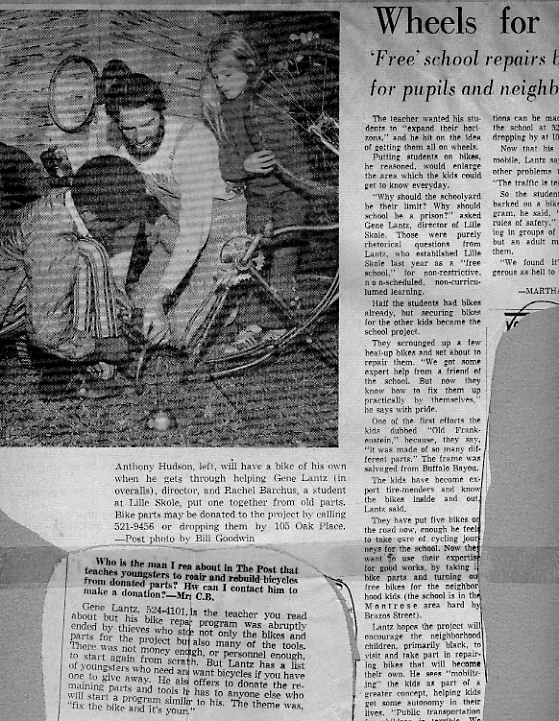 The idea of "school" was transformed at Lille Skole. When I began it, I thought of "school" the way everybody else did -- a place where children retreat from the rest of the world and quietly prepare for the day they will go out and join in. That idea of a retreat was challenged even before the school actually began. When the Houston police assassinated Black militant Carl Hampton, August 1, 1970, I realized that whatever the school became depended very much on what was happening in the rest of the world. I remember asking people, completely innocently, "If children had a realistic schooling and upbringing, who would they get to fight in Vietnam?" I had no idea what the answer to my question was.

Slowly, Lille Skole gave up the idea of being a sheltered retreat and began taking part in our world. As long as their parents had no object and it was physically possible, we began attending public events, including protests. When I found out how easy it was to get people to give up the dusty bicycles in their garages, I started a program of working with the kids to repair them. Soon, all of us had bikes. Then, we started collecting them for giveaway in Fourth Ward, a completely isolated and impoverished all-Black community where our school was located during its second year. Of course, I had no clue as to what I was getting into. After Cynthia left me and Diana had taken most of the tuition-paying students into her more-traditional private school, I was completely strapped for resources. I had to return to graduate school just to draw the rest of my GI Bill entitlement. It meant that I was gone almost every evening.

Right after the article above appeared, our impoverished neighbors hit our workshop to steal all the bicycles, all the parts, and all the tools while I was in class at University of Houston. They also took my music player and everything else in the back of the building and, to an extent, things inside the building! I coined the term "liberal's lament" to explain how well-intentioned but naive people bite off more than they can chew!

The article below appeared in the University of Houston newspaper after a peace demonstration. The photographer saw me with some of the kids and assumed I was their father. JoAnna on the left, Rachel on the right. These three girls were very close and sometimes called our school, "The Lille Skole Finishing School for Young Ladies." They also opened a topless bar! 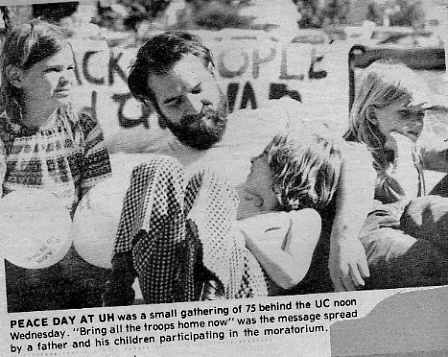 "Pretty Patsy" Martin volunteered as a live-in instructor at Lille Skole during its last months. By this time, I was beginning to lose control of events at Lille Skole and relied almost completely on volunteers. Patsy was a good one, but we could have gotten into serious trouble during those last months. The Houston Chronicle caught Patsy and the children taking a quick and illegal dip in a city fountain. On a far more serious jaunt, volunteers let the kids jump into Buffalo Bayou while I was ill. It was the only time that I ever felt that safety levels had been broached, but it was more than enough to re-assert my control and start getting rid of some volunteers. 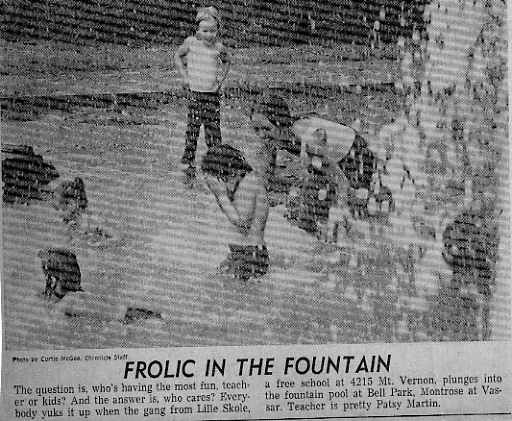